I hope your summer has been joyous and peaceful so far. Mine has been... tumultuous, to say the least. I've had some good solid fun, but there's also been lots of dark difficult news and work. It's only mid-July and I admit I've already caught myself thinking wistfully of fall.

A friend posted a meme recently that said something like, "being an adult means starting every week saying to yourself, 'things will calm down after this week'". That hit home. It reminded me to heed the wisdom I've often heard that "this is it". Things aren't necessarily ever going to calm down. Life isn't going to suddenly open up and be free of all pain. Suffering and joy and love and loss are just human. But even in this great big messy now, there's comfort to be found in the idea that we're in it together. We have each other.

In this spirit, we had a small adventure here recently that I thought you might like to hear about, so here goes:

It starts a few years ago when I began watering some new landscaping in the front yard. I noticed that a handsome crow often came to drink from the leftover puddles, so I started making a puddle with him in mind. Soon enough this bright-eyed creature came to greet me every time I stepped outside, and especially at watering time in the early evening.

I began leaving a few almonds out for the same crow from time to time and then realized that there were actually two crows who frequented my front porch and back deck.

Fast forward to last summer when I discovered a crow nest in the large ginkgo tree in our front yard. I wasn't able to watch the nest carefully, but I hoped that the same crows who'd been visiting me had decided to make their home near ours.

Then about a month ago I laid down in bed one afternoon for a nap and discovered I could see a new nest in the ginkgo tree from my pillow (it was so well hidden that hardly any other vantage point worked). This nest was a bit higher and more elaborate than the last and much to my delight, I saw tiny bobble headed babies reaching out with eager beaks when their parents arrived. During a stressful time in my life, this was a welcome, happy sight.

A few days passed peacefully but then tragedy struck, as it does in every world. One of the babies fell (or was pushed) from the nest. Luna, our sweet pup, found the baby struggling near a clump of lavender. At the time, I was with Darian, Lola, and Tiffany, three of my beloved Wolves and writing friends. 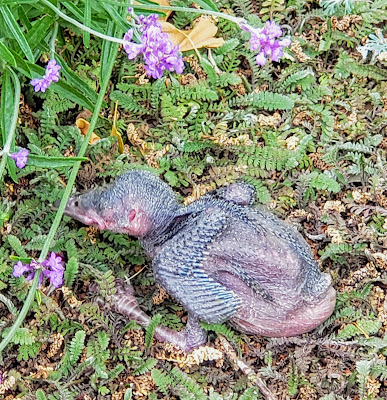 The baby had no feathers, and looked so young and fragile, we thought for sure that it must be injured or dying. But then it moved. It craned its neck and opened wide for food. We didn't know how to help it, or if we should. Crows are famously intelligent, and if they find a human bothering one of their own, they've been known to attack for years on end, and even to communicate to other crows to target specific people. (I'm completely serious, look it up.) 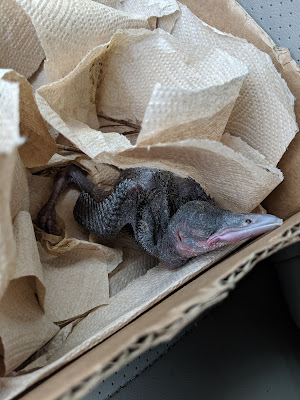 We researched online, called half a dozen numbers, and finally discovered that the best course of action, if we could not return the baby to its own nest (which was impossibly high), was to build a makeshift nest and place it out of the reach of cats, etc., near where the parents might find it and continue to care for their baby. 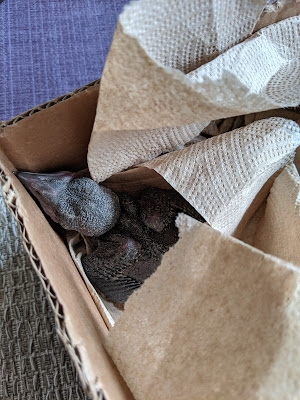 We did exactly that. Lola stood guard (and on lookout for mom and dad) while Darian and Tiffany swiftly made a nest from a cardboard box, and transferred the baby. I pulled out a screen, climbed out on the roof, and placed a couple of nails so that the new nest wouldn't slide away. We gave our well wishes to the little one and closed the window. We hoped for the best. 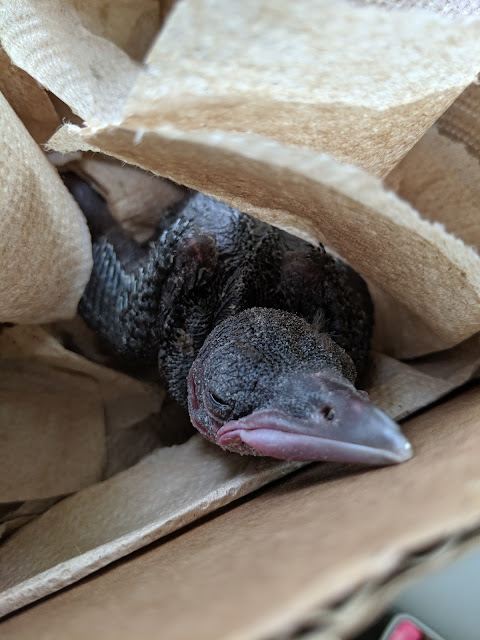 Hours passed and I started to fear that if I checked on the nest, the baby crow would be dead. All creatures die, and I know that a loss of this kind is common and expected, but I couldn't help it. My heart was already heavy with other worries. I wondered. I bit my nails. I spied on the original nest and saw that the parent  crows were attending carefully to their other babies. They either hadn't found the new nest, or had chosen to ignore it. Finally, I checked on the baby we'd tried to save. It was wide awake and quite desperate for food. 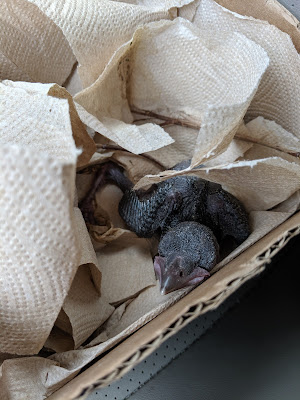 So. I called one last number, and by a small miracle, a real human answered instead of a machine. Josh, a staff member at Paws Wildlife Center in Lynnwood, listened as I told the story. He assured me that we'd done everything right and that if the parents were not attending to the new nest, the only way the baby might survive is if we brought it to the shelter. And so, just at the start of rush hour, I strapped that little box nest in, and drove that sweet critter to Lynnwood. 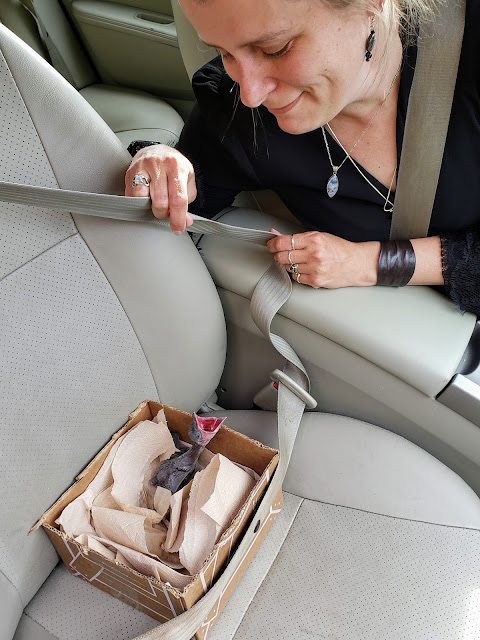 Paws was wonderful. They welcomed the crow baby with open arms and assured me that he would be examined quickly and then hydrated. I learned that it's always okay to touch a baby bird, contrary to popular belief, and that mother birds won't reject a baby because of human smell. I also learned that baby birds are very warm and need higher temperatures than we do. I left Paws feeling lucky to live relatively close to such an organization, and lucky, in a broader sense, to be human. We're not all selfish and cruel and cranky. Many of us, I'll even wager most of us, know how to love and provide life-saving care. 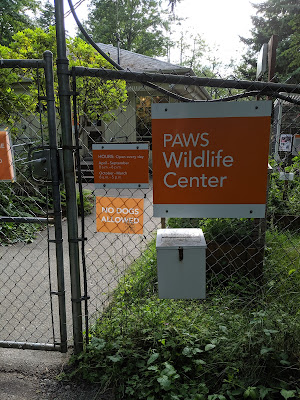 Two weeks ago I noticed that the crow nest was empty. I don't know if a hawk or owl attacked, or if some other calamity befell the occupants. I do know it's too early for those babies to have properly fledged. It's possible that our little fellow is the only baby to survive this year.

Life is full of so many strange twists. Maybe that fall from the nest actually saved his life. I hope so.

We're leaving for Scotland soon and I can't wait to be among the hills and greens of a country I've loved since childhood. I'll be bringing my passions and worries with me, but it'll be good to have, as another close friend put it, a true change of scenery and some distance from my normal routines and ruts.

Much love to you all, always.
-Edie 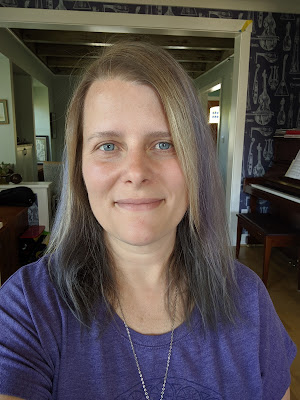 October, the Most Wicked Month 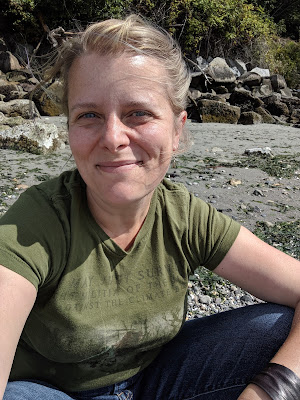 Hi loves, It's been a while since I last posted here so I won't try and catch up on everything. If we know each other well, you're already in the loop, and if we don't, well, I suppose you'll be just fine without a blow by blow. All our lives are busy and complicated. All of us only have so much bandwidth to spare. The big highlights were an incredibly beautiful trip to Scotland and Ireland this summer: And lots of social time with good folks once we returned: Now the kids are back in school, the leaves are falling, and my youngest and I recently had a wonderful time camping on Orcas Island with his classmates. Since then, autumn ailments have knocked us down a few rungs, I'm afraid. =/ October looks to be an insanely busy month with lotsa travel. I can't say I'm thrilled about all of it, but I know there'll be plenty of laughter and love throughout. And glitter... more on that anon. ;) T
Read more